Holiday Shopping has officially kicked off, and more people are heading to the store. Leading to crowded and more dangerous parking lots. Samantha Sonner has more on how to help stay safe in busy parking lots and what to do if you are in a minor accident.

Because an accident on private property is a civil dispute, Las Cruces Police Department spokesman Dan Trujillo says the department will not respond and take a police report.

Minor parking lot accidents could cost thousands of dollars, and they are more frequent during the holiday season. Josie Sanchez, a personal lines insurance agent at Grindell and Romero says last December they saw about 5 parking lot crashes. ON average, they usually see maybe 1 or 2 a month.

“It either backing out, coming in, but a lot of people are in a rush.” Sanchez said. “But this is the time to really use a little courtesy among other drivers, you know safe driving.”

If you are in one of these accidents the first thing you should do is exchange information. If the other party doesn’t want to, the police department will respond.

“More than 9 times out of 10, once we arrive on scene they exchange information,” Trujillo said. “But we recommend, take pictures. Most everybody has smart phones now a days, take photos.  Even take photos of the other person’s license, insurance card. That’s the easiest way, instead of just writing down information take a good quality photo of it.”

You also need to determine who was at fault in the accident.

“New Mexico is an at fault state,” Sanchez said. “So, whoever is at fault will take care of your bodily injuries, plus the property damage on the vehicle that’s what the liability is.”

But, people are not always willing to admit it was their mistake.

“You know among those two people, I’m hoping that they will be able to resolve ok well it was your fault or maybe it was your fault,” Sanchez said. “But in that case, I think the best thing to do is just to hand it over to your insurance company and let them speak for you, defend you.”

You can see if anyone else saw what happened, because they could help insurance companies determine what happened.

“Make sure you look around, are there any witnesses,” Sanchez said. “Try to talk to somebody about a witness. You know, you think you can be my witness you saw what happened.”

You can call your insurance company to see if the witness can give an official report from the scene, or if they will call them at a different time. Trujillo says the best way to avoid accidents like this is to slow down and pay attention.

“Take your time,” Trujillo said. “Allow a lot of time for going into the store, and shopping. There is no reason to be in a hurry this time of the year, or any time of the year really, We know that you are going to have a lot of people out, not just yourself, so slow down, take your time, and be aware on your surroundings. 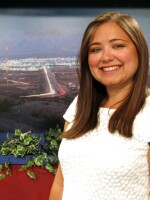