Memories Of Leonard Bernstein As We Celebrate 100 Years

Commentary: When I was a child growing up in Manhattan in the 1960s, my mother took me to all of the Young People’s Concerts at the New York Philharmonic, where Leonard Bernstein would move between the podium and his piano chatting with the audience, asking questions, telling stories and all the while elucidating the excitement and meaning of music.

My strongest memories of those afternoons, though, are not what happened on stage, but what happened backstage. My parents were friends with Bernstein, so we would always go backstage afterwards to congratulate and thank him.

I was terribly shy, trying desperately to hide behind my mother’s dress. But Bernstein always greeted me the same way. He bent down, smiled at me, picked up my hand, and kissed it. This small gesture of chivalry and kindness moved me even then. It made me feel special, and seen. Everyone knows that Lenny was brilliant, flamboyant, effusive, and generous in his teaching and his music. But as the world celebrates the centennial of his birth this week, I want also to remember him as deeply kind man, with a warm and open heart.

In December, 1965, when I was nine, the backstage greeting turned into something more. I was asked to participate in some promotional pictures for the Young People’s Concerts. Two boys and another girl and I were taken up an elevator and brought into a room with a piano, where Bernstein was seated. The one picture I have of the event — now quite faded — shows him smiling and talking to us.

A week later I was sent a check for $5 for my participation — my first paycheck! — with a letter thanking my mother for allowing me to participate.

We left New York when I was eleven, and it would be many years before I saw Bernstein again. But I would hear about him frequently from my parents. My father, the violinist Zvi Zeitlin, had met Bernstein in 1947 in Israel, when they were both in their 20s. Later they were at the Tanglewood Music Festival together, and over the years, Bernstein engaged and re-engaged my father to perform with him and the NY Phil. My dad wrote that of all the great conductors he performed with, “Lenny was the most inspiring and unforgettable… He was sincerity personified.”

My mother, meanwhile, had her own relationship with Bernstein, through the woman who began as his early piano teacher and then became his life-long secretary, Helen Coates. Helen and my mother met in the early 1950s and became so close that my mom always called Helen her second mother, and Helen clearly saw her as the daughter she never had. Towards the end of Helen’s life, she starting giving my mother gifts that Bernstein had given her over the years: an inscribed necklace celebrating five years of her working with him; a lorgnette – opera glasses – that he found for her in Paris, and then spent an entire evening searching for just the right strand of beads to hang it from; a fragment of a song that he would compose in her honor. Helen told my mother many stories about Bernstein, and my mother told them to us. In each of the many items our family now owns that Lenny gave Helen, there is a story or a note in his handwriting that bespeaks his overflowing heart and devotion to Helen, who had in a sense “discovered” him as a 14 year old. “For Helen,” he wrote, for example, inside a lacquered box from Korea, “a pearl of great price, unique pearl of all secretaries, with much love from Lenny, July 1978.” Helen devoted her life to Bernstein, and he celebrated the anniversaries of their working relationship with his thoughtful and unique gifts.

In 1987, as an adult, I was living in Boston and my mother called to tell me that the nearby Pine Manor College was going to give Helen Coates an honorary doctorate for her life in music, and that Bernstein would be the speaker (and also would receive an honorary degree). I joined her at the lovely bucolic campus on a gorgeous March afternoon. Lenny focused his remarks on Helen’s middle name, Grace, and how she had graced his life with her teaching and guidance since he was a child. Afterwards, we went back to greet them. I had not seen Bernstein in more than twenty years. But I told him how I cherished the memories of seeing him backstage as a child and how he always kissed my hand. Well, you can guess what happened next: Lenny bowed slightly, took my hand, and kissed it again — for what would turn out to be the last time.

Helen died two years later, and shockingly, Lenny followed her two years after that. I moved to New Mexico in 1991, and some years later, began hosting Intermezzo at KRWG. I could never have imagined as a child that I might have a career as a music host, but what joy I have found discovering and sharing music with our listeners. And whenever I play a cd with Bernstein conducting or a cd of his music, my heart fills — and I feel the faintest tingle on the top of my hand. 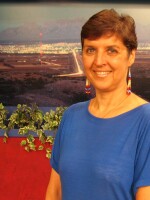 Leora Zeitlin
Leora Zeitlin is one of the hosts (Thursday/Friday) of Intermezzo, KRWG-FM's local classical music program, which airs weekdays from 2pm to 4pm. In addition to showcasing an eclectic selection of music, Intermezzo features interviews with visiting and local musicians, "name that composer" challenges, ticket giveaways, and on Fridays, the popular "Intermezzo by Request."
See stories by Leora Zeitlin