Ken Miyagishima reflects on his time as Mayor of Las Cruces

Mayor Ken Miyagishima is going into his 16th year as the Mayor of Las Cruces. He was elected into office in 2007 after serving six years as a City Councilor for the city’s sixth district. He is the longest-serving mayor in the history of the city, and last December, he announced that he would not run for re-election.

Ken Miyagishima reflects on his time as Mayor of Las Cruces

Miyagishima has been the Mayor for over 15 years now, but he has been a public servant since 1992 at age 28, when he was elected to the office of Dona Ana County Commissioner for District 4.

Miyagishima said that he’ll miss the camaraderie that comes with being a public servant, and being able to help make decisions for the growth of the city. But ultimately, feels that it’s time to step down.

“I’m sure I’ll still participate somehow. They may want to call on me for something. But nonetheless, after I leave I pretty much need to stay out of it, [and] let someone else take over for that,” he said. “I’m slowly trying to transition myself now, for when that time comes. Because that will be 30 years in public office. It’s kind of a jolt.”

Sharon Thomas served with Miyagishima as the District 6 City Councilor from 2007 to 2013. She said that the evolution of the city and its amenities were greatly helped by Miyagishima’s leadership.

“I really think he marshaled this city from being a kind of big-small town into becoming a small city,” she said. “It wasn’t just us on the council, he got more involved with the National Mayor’s Association and what’s going on across the country … It was a big learning period, and everybody was excited and interested to do that.”

Gill Sorg was elected as Las Cruces City Councilor representing District 5 in 2008, and served for 12 years with Miyagishima. He said that he always appreciated the way that the mayor handled himself when talking with members of the public, and is also proud to have been part of a city government that encourages the importance of education.

Miyagishima said that in terms of his legacy, he would like to be remembered for his emphasis on education, and for his visits to talk to young people about the importance of staying in school.

“I immediately start off telling these third graders that they’re our future doctors, scientists, police officers, firefighters, teachers, and I need them to stay in school,” he said. “ … That’s something there that, I hope they’ll know that I put a lot of emphasis on our children’s education because even though I’m not on the school board, everything revolves around our future leaders, our future workers, employers, things of this nature that they’re eventually going to be.”

While he’s still working to deal with the city’s contemporary issues such as crime and immigration, Miyagishima says that he’s also working to make his transition out of office smooth for his successor, whomever it may be. For KRWG Public Media, I’m Jonny Coker. 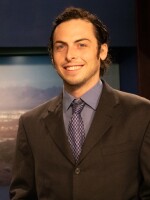