In January, Doña Ana County introduced a mandatory COVID-19 vaccination policy for some employees. The county says it’s a critical safety measure, but some critics argue the directive infringes on the rights of employees.

Just recently, litigation was filed by one Doña Ana detention officer claiming the county did not have the authority to mandate vaccination.

“My directive was really more towards approximately 200 to 220 of our employees who had not been vaccinated at this point, to really move them to take advantage of the fact that they measure so high in the priority list for vaccination,” Macias said. “And why are they there? They're there because they have the greatest impact in the community.”

Maryam Ahranjani, an associate professor of law at the University of New Mexico, says government officials can mandate vaccination for their employees.

“The law is pretty clear that in using the state's police power to regulate for the health, safety and welfare of its citizens, an employer can require vaccinations,” Ahranjani said.

Ahranjani pointed to Jacobson v. Massachusetts, a 1905 Supreme Court Case that ruled mandatory vaccinations constitutional. But she says that just because she believes employers can require vaccinations doesn’t mean it’s the best solution.

“There's some strong arguments for why it's probably not the best approach,” Ahranjani said. “One is there are going to be people who don't want to, or say that they can't, for religious or medical reasons, comply with such a requirement. And so, as a result, that's going to cause potentially some litigation, some costs.”

By mid-February, 93% of essential county employees had been vaccinated. Of the 390 personnel required to get the COVID-19 vaccine, nine requests were filed for special accommodation due to religious or medical needs and seven were granted.

Macias emphasized that the current policy does not impact all 900 county workers, only select employees who work directly on the front lines. He says these employees have a responsibility to the general public because of the essential service they provide.

“When it comes to the security of the community, I believe that we have enhanced authority to make sure that we are uniformly providing that service,” Macias said. “Put your own individual beliefs aside, because your role is to protect the public. That's what you were hired for.”

But critics, like New Mexico Attorney Ana Garner, say that because the vaccine has been given emergency use authorization by the FDA instead of full approval, the legality of the county policy is in question.

“They are authorized for marketing and distribution only under the emergency use authorization of the FDA,” Garner said. “People don't necessarily understand the difference between ‘Well, the FDA said that they could market it,’ versus approval. People don't really understand that fine distinction. It is experimental. That's the basic bottom line. And because it's experimental, everyone has the absolute right as a human being to refuse it, and without consequences of losing their jobs.”

Consequences feared by one Doña Ana County detention officer who recently filed litigation against the county manager. The officer, represented by Garner, detailed threats of job loss and write-ups demanding compliance and argued the county should not be able to force employees to get vaccinated.

It's a sentiment shared by Paul Castañeda, a southwest representative for Communication Workers of America, a union that represents Doña Ana County deputies. While Castañeda reports all employees represented by CWA have complied with the mandate or received accommodation, he says the union does not agree with the directive.

“We don't believe it should have been mandated,” Castañeda said. “Worst case, I think we should have had some conversation before that type of notice went out to all employees, quite honestly, I mean, not just, you know, from a CWA standpoint, but other unions as well. We were not reached out or, you know, even talked to or even told this was coming out until it was actually put out by the county manager.”

“So many laws and policies really require that people buy into whatever it is that’s being mandated,” Ahranjani said. “And so, I always think it's important for the public to have access to good information and for all of us members of the public to educate ourselves.” 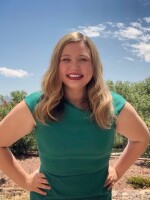