Vicious Gang, Barrio Azteca, Gets Its Start In El Paso

During our road trip along the U.S./Mexico border, we took a walk along the Rio Grande in El Paso, Texas. You can look right into Mexico and the heart of Ciudad Juarez across the river. Monique Ortiz Uribe brought us here. She's a reporter with public radio's Fronteras desk, which covers the border, and she pointed out a gray office building.

MONIQUE ORTIZ URIBE: See, that's city hall inside Juarez in Mexico, and to our right we can see the international bridge that connects the two cities of El Paso and Juarez.

INSKEEP: A reminder that we're right on the edge between two countries. Now, what was it that happened here you wanted to talk about?

URIBE: So four years ago, this was the site of one of the most heinous crimes committed during the height of the drug war in Juarez. An American couple was chased down by a hit squad and shot dead moments before they reached the bridge back home to safety.

INSKEEP: It was the kind of crime that sticks in the mind. The victims had a baby in the back of the car, the sole survivor of the attack. Early this year, one suspect was convicted in a U.S. federal court for participating in the murders. For reporter Monique Ortiz Uribe, the crime hit close to home.

INSKEEP: On the U.S. side of the border.

INSKEEP: In a very safe city, but nevertheless they became a very dangerous gang and one you'd known about for a long time.

URIBE: They did. They became a transnational gang due to the drug trafficking industry, and I grew up here in El Paso and I've heard about the Barrio Aztecas all my life and I decided I wanted to learn more about their history and how they got to be connected with such a horrific crime. And so I started my journey here in El Paso at a pool hall.

URIBE: At this billiards bar in West El Paso, men in cowboy boots guzzle Mexican beer and shoot pool to the beat of American hip-hop. A stocky bouncer in a polo shirt greets customer. This pool hall happens to be a hangout of the Barrio Azteca gang. It's here where I met Detective Jeff Gibson of the El Paso County Sheriff's Department.

JEFF GIBSON: The Barrio Azteca are everywhere. Many of them you'd never know. They dress well. They eat in family restaurants the same as we would.

URIBE: Gibson first encountered the gang as a rookie jailer 22 years ago. He's been on their tail every since. The Barrio Azteca started in prison when inmates from El Paso banded together for protection.

GIBSON: The Barrio Azteca started in 1986 and then had a constitution and signed it. That's how formal these guys are.

URIBE: The first and last rule in their so-called constitution is once you're in, you can never get out. These guys embody the border. Just take their name. Barrio refers to the poor Mexican-American neighborhoods where they grew up. Azteca is a nod to their pre-Hispanic roots. It also means warrior. They live and work in both the United States and Mexico. And their main source of income? Drugs.

GIBSON: The Barrio Azteca are integrated with the drug trafficking organizations from across the border.

GIBSON: Now these are guys who wear body armor and know how to build car bombs and how to use an M4 or an AK-47 or some of these more high caliber nasty military weapons.

URIBE: The Barrio Azteca acquired weapons in the U.S. and then smuggled them into Mexico to arm the cartel. In Juarez they formed assassination teams whose mission was to hunt down rivals.

URIBE: You're listening to radio chatter between one of those assassination teams. This recording was obtained by U.S. authorities. The hit squad was responsible for the murder of an American couple driving home from a birthday party in Juarez. The wife works for the U.S. consulate. Her husband was a jail guard in El Paso. In the recording we can hear the hit men give confirmation that the deed is done.

URIBE: Using coded language, the speaker says they killed two people in front of city hall. The sole survivor of the attack was the couple's infant daughter, who was found wailing in the back seat. News of the murders reached President Obama, who denounced the crime. Later, U.S. authorities determined the couple was targeted by mistake.

In those days the bloodshed in Juarez was so great that a day without a murder was front-page news. At trial, one Barrio Azteca member testified to killing 100 people a month. Today you'll find the Barrio Azteca jailed on both sides of the border. I decided to visit a prison in Chihuahua City about four hours south of El Paso. Prison guards escorted me to a cell block exclusive to the gang.

So now we're going down a set of concrete steps down into a tunnel that will take us into the prison. Once inside I asked to speak with a Barrio Azteca. What came next was a stunning example of just how interconnected we are on the border. The guard brought out Jose Enrique Jimenez Zavala - green eyes, gray sweats, with smiley and sad faces inked onto his earlobes.

His nickname is El Wicked and he spoke perfect English.

JOSE ENRIQUE JIMENEZ ZAVALA: I'm from - originally from Juarez. I was raised in El Paso.

URIBE: Turns out El Wicked and I grew up in the same neighborhood. We're also the same age, but that's not all. You said you went to Bassett Middle School. That's where I went. I went to Bassett. Yeah, yeah, yeah. We probably were in the same school at the same time. That's right. I drove 250 miles to come face to face with a Barrio Azteca who'd been my middle school classmate.

El Wicked's mother was a drug dealer and his father was absent. At 18 he did time for robbery. He joined the gang in prison. Later, he ended up in Juarez, where he got into drug trafficking. Now he's serving a life sentence for murdering 16 people in a Chihuahua bar. He's accused of killing 300 others.

ZAVALA: There was nothing nice about my world - just parties, girls, cars, a lot of material things that we always looking for. There's a real big, big price I had to pay at the end. For me, I'm looking to spend the rest of my life here.

URIBE: The number of Barrio Azteca members in the United States is estimated at 4,000, according to gang intelligence officers in El Paso. Since the consulate murders in 2010, multiple Barrio Azteca members have been convicted in U.S. federal court for crimes related to drug trafficking, money laundering and murder. Their main capo in Juarez, Eduardo Ravelo, is listed on the FBI's Top 10 Most Wanted list. 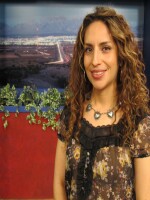